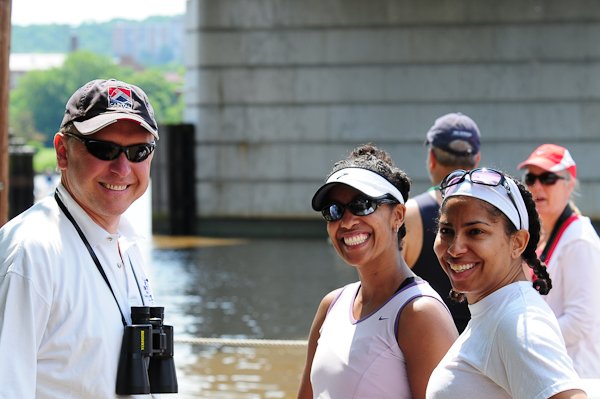 I hope your summer is going well. Congratulations to the many of you who have competed in the sprint racing season thus far. The results show how competitive our members can be and I am looking forward to hearing about many more successes throughout the summer.

As we approach the midpoint of the year, I would to like reflect on a few changes that we have made this year to improve our organization and to announce some additional changes to further that goal.

Finally, as you know, running a club of 300 members is not an easy task.  Many of the Board members, and countless others, have stepped up to volunteer, but we always need more help.  We always need help with our fundraising efforts, with equipment maintenance, with creating financial documents, running events, and countless other tasks. If you have not volunteered this year, please do sign up for the various volunteer calls.  We really need your help to continue to make Capital great!

Which program(s) do you coach at Capital?

I coach the masters competitive men’s and women’s sweep rowing teams at Capital.

Do you coach anywhere else?

I have coached the juniors rowing program for my club, Dinamo, in Minsk, Belarus, the junior’s team for the Soviet National Team, and the juniors for Belarusian National team.  I was the head rowing coach at Bishop Ireton High School for the 2013-2014 season and I also coach the open sculling program at Potomac Boat Club when I am not coaching for Capital.

What are you looking forward to this year at Capital?

Developing members of our masters competitive program to an extent where they will be able to compete for a victory at the USRowing Masters National Championship in Camden, New Jersey this August and at the Head of the Charles Regatta in Boston, Massachusetts this coming October.

When did you first start rowing? What drew you to it?

I started rowing in November 1976 (yes!).  I just wanted to get all the muscles I had seen in rowing pictures 🙂

During your rowing career as an athlete, what was your most memorable or exciting race?

My most memorable race was in 1982 at one of the international regattas, where we beat current Olympic and World Champions in M4+ from DDR*.

*DDR is the German acronym for Deutsche Demokratische Republik (German) or German Democratic Republic (English), a former state in Europe, 1949–1990. It is also referred to as East Germany

How did you first get involved with Capital?

Capital Rowing Club was searching for an experienced sweep coach in 1994.  I applied for the position and was hired to coach the competitive sweep program beginning in March 1994.

What is it about Capital that encourages you to return each year?

This is a hard one. Most simply, I would say seeing our team achieving new heights every year. That is my favorite Capital moment.

Where did you grow up and, if you aren’t from DC, what brought you here?

I grew up in Minsk, Belarus. I moved to DC in March 1994 from NYC to be a coach at Capital.

What other hobbies or activities are you involved in outside of rowing?

Coaching, keep learning about rowing, spending time with my family – this pretty much is all I do.

When you’re not coaching, what’s your day job?

I work for Virginia Tech, National Capital Region, as a member of managerial administration team.

Favorite place in the DC area?

If you could listen to just one song or album while you rowed, what would it be?

For some reason, I cannot listen to music during rowing or while working out – it takes away my focus. However, I like listening to music performed by Pink Floyd, without focusing much on what they are singing about.

If you could give Capital rowers a piece of advice, what would it be?

Whatever you do in a boat, feel what the boat is doing and stay relaxed!

This month, we’re thinking about staying cool when things heat up — check out the tips from US Rowing here.

As the popularity of CRC’s sculling programs have increased, our fleet of singles and doubles is being heavily used and, unfortunately, some of the boats are showing the wear and tear.  A group of club scullers came together last month and decided that the need was great enough to warrant a fundraising effort for a least one new single.  Two club scullers have generously said that they will each give $1,000 to the campaign if we can raise a matching $2,000.  We are well on our way to meet this goal and the hope is to purchase a new single in time for the fall season.

If you are interested in contributing to this campaign, please write a check to the Capital Rowing Club and put “New Sculling Boat Fund” in the memo line.  Checks should be sent to Geoff Brown, 652 Massachusetts Ave. NE, Washington, DC 20002.

Which program do you row with at Capital?

When did you first start rowing?

Why did you choose rowing and what do you like about it?

I was entering the Naval Academy and had to choose a sport.  I received a letter from the plebe crew coach inviting me to join the crew team.  I had never rowed in my life, but it looked like fun so I gave it a try.  I’ve been rowing ever since.

It was 1988.  There was no Capital Rowing Club.  I was rowing with Annapolis Rowing Club at the time and heard that there were refugees from Potomac Boat Club’s waiting list that wanted to start a club.  So we did.  We had no equipment, we rented an eight (the Villaret) from a local high school by paying their rack fees at Thompson’s Boat House.  We also rented a launch.  There was one program (men’s competitive) and we only went to races on the Potomac since we had no boats, oars, or trailer of our own.  The next year we rented other boats and started other programs.  We did a lot of scavenging and making do with cast-off equipment to meet the demands of the various programs.  After a few years Thompson’s became too crowded and we shifted our base of operations to the Anacostia River, specifically underneath the 11th Street bridge.  We built our own racks, towed some docks over from Thompson’s, cleared a site for rowing, and continued to grow the club.  We eventually managed to obtain access to the old WWII boat house that stood between the bridge spans, bought new docks, and started our own regattas.  When the 11th Street bridge was to be torn down, we were fortunate (through a lot of hard work by a few individuals) to wind up in the luxurious site we now occupy.

What’s the biggest change you’ve seen at Capital since you started?

I am still in awe of the amount of equipment (boats, oars, ergs, launches, etc.), the number of people, coaches, and programs we have, and the facility we row out of.  None of it seemed possible in 1988.

Where did you grow up and what brought you to DC?

I grew up in Pittsburgh, PA and came to the DC area after I got out of the Navy.

What other sports or activities are you involved in?

I do a lot of cycling.  I bike to and from home in Alexandria, to the boathouse, and to work almost every day.​​  I also swam and played basketball in high school.

When you’re not rowing, what’s your day job?

Favorite place in the DC area?

Winning my first gold medal at Master’s Nationals in Long Beach, CA in 1997 (mixed A8+)

What are you looking forward to this year as a Capital rower?

What encourages you to keep coming back to Capital each year?

Watching the club continue to progress and the coaching.  Early on, we changed coaches every 4 months or so.  The programs had no continuity, no stability, and there was a lack of quality time on the water.  You have no idea what a huge difference it makes to have quality, reliable, and knowledgeable coaching.

If you could give Capital rowers a piece of advice, what would it be?

Don’t ever take for granted the equipment the club owns, the facility you row out of, or the level of coaching.

Planning for Cap Sprints is underway! One of the reasons we are able to keep race-fees at a flat rate is that this is a volunteer-run event. Plan to support your teammates both on and off the water by donating your time!  Board meeting minutes can be found here.

Comp Sculling welcomes Coach Jason, who has been a key component of Comp Sculling’s early success this season.  Comp Sculling had several wins at Stonewall, SNR, and the Row for the Cure.

CARP is fully staffed!  Congrats to Sofija Korac, who took first in the mixed adaptive 1x at Richmond.  Click here to sign up to volunteer for CARP practices.

The Juniors program continues to expand thanks to a grant from DC Trust.  Capital will be hosting a six-week summer camp for 25 African American students from ages 13-18.  The program kicked off June 29 — we are excited to share our love of the river and of rowing with the Anacostia community!

SAW is putting out two boats per practice and could use some help finding coxswains on Sunday mornings.  If you are interested in coxing, please contact Jim Smailes or Mary Ellsworth, or send an email to seniorandweekend_reps@capitalrowing.org.  SAW is welcoming back seven athletes who attended the Women’s Navy Rowing Camp in early June — look out for them on the water at Cap Sprints!

The Comp team claimed several wins at Stonewall, SNR, and Richmond.  The Men’s Comp team is looking to add to its roster.  For more information, contact Brett Rini at  comp_men_rep@capitalrowing.org.

In case you missed it…

News from around our river, our boathouse, and our community: