Like the past few weeks, we will continue to emphasize the need to think of the catch as a motion within the stroke and not a position. This through encompasses all the drills we’ve been doing recently, such as the gradual roll up of the square, the gradual raise of the hands into the front end, and the control of the outside arm versus the inside arm during the recovery and the stroke.

All aspects are important because we need to make sure we don’t hit the full slide, pause or hang with the blade, start the drive with the legs, and as a result, miss water that we could have used to send the boat further each stroke.

So it’s important to make sure that when we do the gradual raise of the hands and we have the square of the blade along the recovery, we finish the square which leads directly into the catch, which directly leads into the drive.

This is because we want to catch as we are roll up with our legs the last inch of the recovery. So keep these items the focus of practice again this week.

We’ll incorporate the drill strokes every 10-15 strokes during the steady state, eventually dropping them out, and adding in by eight.

Drill/ Workout: 2 x 18 minute pieces, with 2 minute rest in between.

Workout: Steady state at 18 SPM to start at 90 percent pressure.

Warm up: Regular pick drill by six with extended rotations at half slide. When back to full, 18 SPM with pauses at half slide for 15-20 stroke rotations, until we reach the stadium.

The past week or so I’ve been asking boats to think about the catch in different terms; specifically that the catch is not a position in the stroke, but rather a motion of a stroke that leads into another. This idea is being emphasized to help rowers avoid pausing at full slide, which leads rowers to hang the blade above the water, then catch, then drive. This stop and go positioning hinders the rhythm of the rowers in the boat, throws of catch timing, and causes rush – all things we don’t like.

And to emphasize this even more, below is a close up video of the body positions leading into the next in regular speed, followed by slow motion. You should be able to see that the arms lead into the body, body leads into legs, and the arms on the recovery lead into the catch, and there is no delay between any of motions.

Warm up: We will to do the pauses from the past couple of weeks – at the feather and arms and body over – 10-15 stroke rotations and three times through the boat for each position.

We will do each drill segment two times through, and once complete, we will drop the drills and gradually bring the rating up from the 18 on the way back, and add in by 8.

Drill/ Workout: To really emphasize the importance of having one position lead into the next, and being ready for the catch, we will be doing catch calls. This means, wherever we are on the recovery, arms away, or half slide or three-quarter slide, as soon as you hear “catch,” you’ll catch and drive.

So it will be very important to listen to the coaches and the coxswains when we are doing these. It will also be important to have a quick pop/ turnaround to make sure we are applying appropriate pressure on the drive.

The drill strokes will also be on the square by six, at various ratings as the practice goes on.

Workout: 2 x 16 minute pieces, with the first eight minutes of each piece by six with catch calls incorporated.

Warm up: Regular pick drill followed by 10-15 stroke rotations of outside arm only.

Workout: Steady state at 24 SPM. The first half by six, and eventually taking it up to 8. 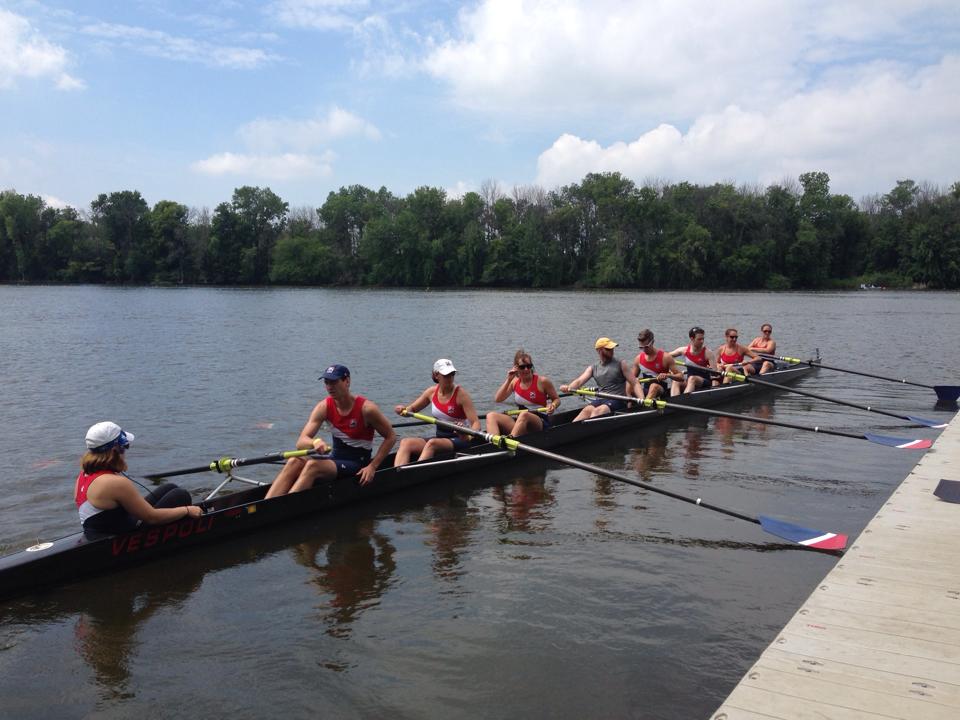 As the summer season wraps up this week and we transition to the fall season, we will continue to get lots of long, controlled and technically sounds strokes in using various drills.

Warm up: Pick drill by six followed by 10-15 strokes rotations of pauses at half slide until we hit the stadium.

Drill/ workout: 2 x 20 minute pieces with the first ten minutes of each by 6, with 10-15 stroke rotations of outside arm only. After 10 minutes we will drop the drill, and in the last five minutes we will go by 8.

Warm up: Pick drill by six followed by 10-15 stroke rotations of outside arm only until we hit the stadium.

We will eventually drop the drills and take it to all 8 at the 18.

Warm up: Pick drill by six followed by 10-15 stroke rotations of flat outside hand only on the feather.

The first three segments will be by six but we will take it up to eight when we take it to the 24.

Warm up: Pick drill by six followed by 10-15 stroke rotations of flat outside hand only on the feather.

On the return, we will gradually bump up the rating and add in by all 8.

For this week, we’ll plan on getting lots and lots of strokes in, at least for Tuesday to Thursday, with very simple drill work – pauses and some cut the cake. This is partially due to the fact that the summer season is winding down and we can begin focusing more on technique at lower ratings, which will be much much much easier than trying to focus on technique at 28 or 30 SPM.

So that said, this week we will continue to focus on raising the hands up when we come up the recovery, as well as the gradual roll up of the blade as soon as the legs start to move. This means we’re getting ourselves squared before we attempt to catch, in order to help prevent flip catching or missing water.

As a note, Monday will be a slight anomaly to get some piece work in for those heading to Masters Nationals. In addition, Monday after practice we will derig a few boats. Tuesday will be a longer type row.

Warm up: Pressure/ Rating warm up with changes taking place after every two rotations of pairs

Workout: 5 x 3 minute pieces. Each piece will begin with a start 5, high 20 and settle at given ratings. After 90 seconds, we’ll settle/ lengthen out to 20 SPM for 90 seconds. Two minute break.

Cool down: After the last piece we’ll take it on a cool down of 10-15 stroke rotations of cut the cake.

Warm up: Pick drill by six, followed by 10-15 stroke rotations of cut the cake

Drill/ workout: Similar to last week, we’ll take it on a steady state with pauses to continue the focus on keeping the body and hands up into full slide as the legs come up. We’ll also focus on the gradual roll up of the feather.

The steady state will be 80% pressure at 18 SPM, by six to start and eventually taking it to all eight. Pauses will be at arms and body over, then at half slide.

As notes, we’ll begin the gradual roll up as the legs start moving on the arms and body over pause, and the blade will be partially squared on the half slide pause.

Warm up: Pick drill by six, followed by for 10-15 stroke rotations of cut the cake

Drill/ workout: 2 x 20 minute pieces. The first 10 minutes of each piece will include pauses. The second 10 minutes will be continuous by 6 and then by 8.

Warm up: Pick drill by six, followed by for 10-15 stroke rotations of pause at three-quarter slide.

No drills for today. Just lots and lots and lots of strokes for practice. If we launch quickly enough, maybe we can make it into the channel.

Workout: Steady state at 20 SPM at 75% pressure. We’ll start by six and after we spin, we’ll pick it up by eight.

We’re going to be taking lots of strokes this week with the focus being on keeping the hands up into the front end for an early catch and avoid missing water/ hanging at the front end. We want to make sure that when we are working hard and trying to get that full slide stroke in, we’re not taking away from our effort by missing water.

Warm up: Pick drill by 6. Once back to full slide, we’ll gradually take the pressure/ rating up from an 18 to a 24, until we reach the stadium.

Drill/ Workout: From the stadium we will pick it up at full slide at 18 SPM at 80 percent pressure by 6, with pauses included every 10-15 strokes. Pauses will first be at arms and body over, followed by half slide. During the pauses, focus on raising those hands into the front end, so we are backing the blade in before we get to full,

In addition, also focus on a gradual roll up of the feather. After the row call at arms and body, ease up the slide with the legs and give ourselves ample time for a gradual roll up that starts as soon as the legs move, and we become square at three-quarters – before we attempt to catch. At half slide, we’ll be partially squared.

We’ll take this for a while, until we spin. We’ll drop out the pauses, gradually increase the rating on the way back and move to all 8.

Warm up: Pauses from Monday by 6 – arms and body over, then half slide, 2 times for each pause. Once back to full slide, we’ll gradually take the pressure/ rating up from an 18 to a 24, until we reach the stadium.

Workout: 3 x 9 min pieces with gradual rating increase every 3 minutes. We will also start the first 3 minutes of each piece by 6 to find the timing and pressure with one another. After 3 minutes we will take it up to 8. Each piece will be followed by a 30 second paddle and 2 minute break.

Each piece will begin with a start five and high, settling to the given rating. Approximate ratings for the pieces depending on how well we are moving:

Cool Down: Rotations of cut the cake every 10-15 strokes.

Warm up: Pauses from Monday by 6 – arms and body over, then half slide, 2 times for each pause. Once back to full slide, we’ll gradually take the pressure/ rating up from an 18 to a 24, until we reach the stadium.

Drill/ Workout: From the stadium we’ll pick it up by 6 at 18 SPM, incorporating first half slide drive only every with the focus on the hands up, early catch, and quick pop off the front end.

We will gradually drop out the first half slide drive and stay steady at the 18, adding in by 8.

Warm up: This will be a pressure and rating warm up with pressure changes and rating changes every 2 rotations,

Cool Down: Rotations of cut the cake every 10-15 strokes.