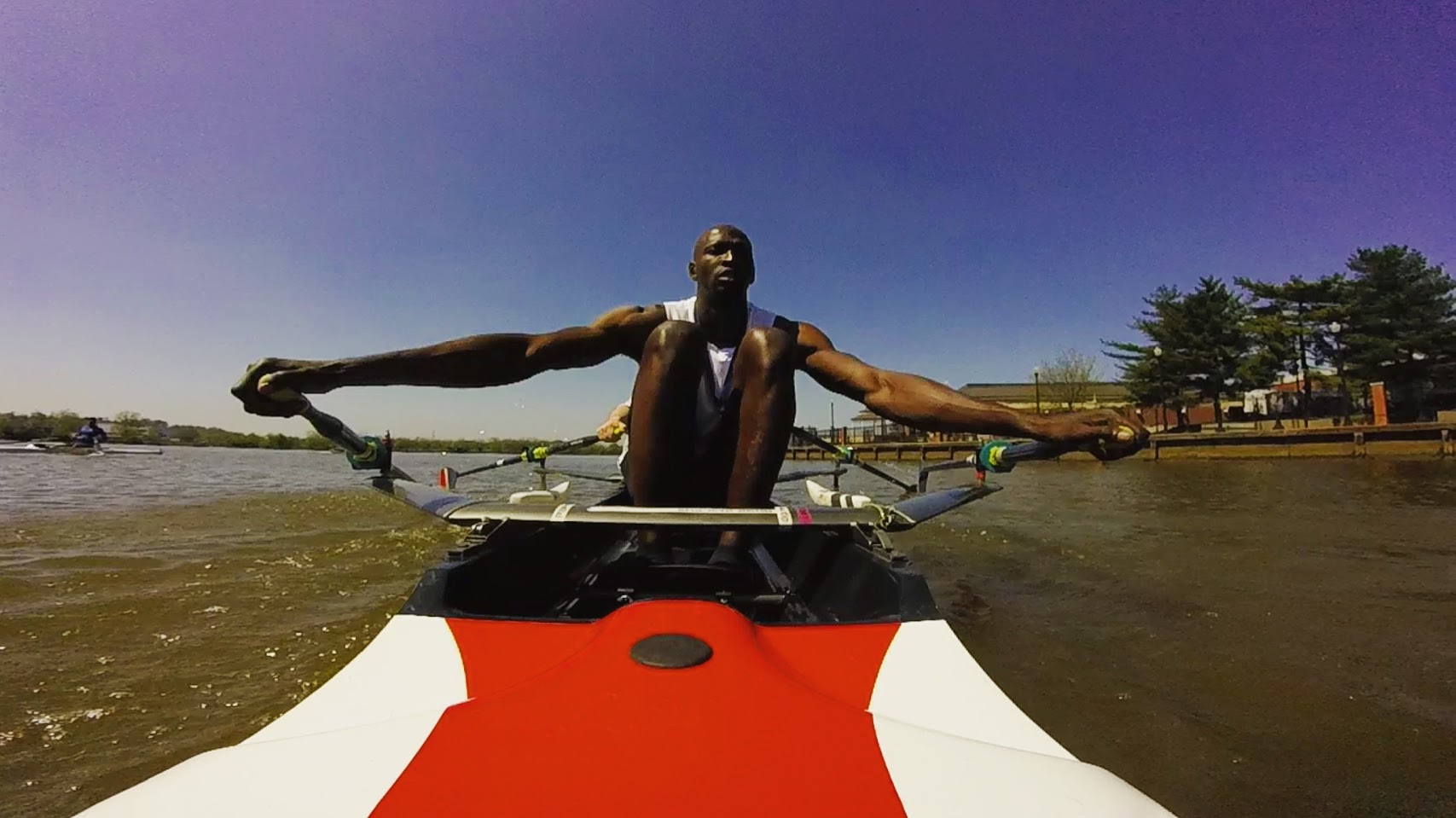 CARP’s very own Dammie Onafeko has conquered the Anacostia River, CRASH-B Sprints, and now he can add the small screen to that growing list.

Congrats to our very own CARP/Capital athlete, Kenny Marrs, and his partner on their participation in the debut Inclusion event at NICR event this year! See the article Georgetown published below.

WASHINGTON – Junior Nathan Wegbreit (Wadsworth, Ill./Homeschool) of the Georgetown University men’s rowing team is used to representing his school when he takes to the water. However, on Sunday, May 8, Wegbreit was not with his normal GU teammates at the 2016 National Invitational Rowing Championships. Instead, he was rowing with Kenny Marrs, a Georgetown freshman, as the only collegiate crew in an adaptive rowing race.

What is Adaptive Rowing
Adaptive rowing, which refers to the equipment adaptations, provides an opportunity and a level playing field for rowers with disabilities. It is broken into three main categories – LTA, TA and AS – to make the competition as fair as possible. LTA is for rowers who use their leg, trunk and arms. There can be a number of sub categories in that based on varying disabilities. TA is for rowers who use just their trunks and arms, while AS is for rowers, generally those with spinal cord injuries or are paralyzed from the chest down, that row by just using their arms and shoulders.

“Adaptive Rowing is something that not a lot of people, even in the rowing community, know about,” Marrs said. “It is really just rowing that is modified for people with disabilities. It is such a great sport, especially because there is almost no contact so the risk of injury is pretty small as long as you are taking proper safety precautions. For people with disabilities, who still want to be active and still keep themselves fit, rowing is an amazing sport for that because there is not a huge risk of injury. And your stroke can be adjusted to whatever is your physical ability. “It is really in a growing phase right now. Normally, what you are doing when you are rowing is using every part of the body. You’re using the legs, back, arms, everything. But adaptive rowing modifies it for people who maybe can’t use all the parts of the normal rowing stroke.”

The initiative began following World War II when blinded veterans competed in an Army-Navy race in Philadelphia. Chris Blackwall, the executive director of USRowing, started the first U.S. rowing club in 1980 solely for people with disabilities and, in 1993, adaptive rowing was included as an exhibition event at the FISA World Rowing Junior Championships in Finland. In 2002, the FISA world championships began to include adaptive rowing in the regular program and the sport was incorporated into the 2008 Beijing Paralympic Games.

One place where adaptive rowing has struggled to be included is at the collegiate level.

“It is not very common for college programs to have adaptive rowing at this point.” Marrs said. “It has been its own thing because it requires a lot of special gear and a lot of special attention. Not a lot of colleges even know that adaptive rowing is much of an option. And a lot of disabled students at colleges don’t know that they have the opportunity to row with their college rowing team. It is kind of a matter of connecting the two and that is what our mission was – to try and get the word out. That is something that USRowing has as a goal – to get some more adaptive rowers involved in their college programs.”

Marrs’ Background
Marrs, a native of Arlington, Va., arrived at the Hilltop from Gonzaga College High School where he served as a coxswain for the crew team.

“That’s the varsity sport I was able to do with my disability — as a coxswain,” Marrs said. “And then I saw some adaptive racing at the Stotesbury Cup in Philadelphia which was a big college race. They added an adaptive category there, so I was able to see that and I thought `wow, that’s something that I could do.’ I looked at some clubs around here and saw Capital Adaptive Rowing Club, which is where I started training as an adaptive rower.

Marrs was born with Congenital Femoral Deficiency (CFD) — meaning one leg is shorter than the other — and is unable to use his lower body in the boat.

“For me, I am a trunk and arms rower. It means that I am not using my legs at all. I’m just pivoting. I don’t have a seat back, but I have several straps that go over my legs and are attached to the seat which is bolted to the boat. What that does is it holds my legs down so when I pivot back, I’m not falling backwards. So I have a waist belt and then two more belts over my legs and that hold me in place. It’s a compromise. I’m trying to be as flexible as possible, but obviously I don’t want myself sliding around too much. The harder you row the harder it is to balance, so that is something you have to take into account.”

How They Met
Marrs’ club team, Capital Adaptive Rowing, trains on the Anacostia River in Washington, D.C. His coach there reached out to Georgetown Men’s Rowing Head Coach Luke Agnini to see if any of his rowers would be interested in racing with Marrs at the National Invitational Rowing Championships.

“Coach reached out to me one morning at practice and asked if I’d be interested in doing this,” said Wegbreit. “I said `for sure’ and we found some times that worked and met up with Kenny and started to row.”

The duo was able to train just three times at Capital Adaptive’s boathouse before making the trip north to Lake Quinsagamond in Worcester, Mass.

“That was super helpful,” Wegbreit said. “Kenny was in the back of the boat so I could see his stroke. He was doing trunk and arms while I was doing a modified version of the full stroke, using my legs as well. When you’re in a Georgetown eight, you’re all going up together, it’s a longer stroke. So it was mainly about adapting to Kenny’s stroke.

“The hardest part was the mental game. You spend so much time beating the stroke into your head and trying to get the perfect rhythm and sequence of everything. That’s why it was really helpful to get some time on the water beforehand.”

While he was adapting to racing with Marrs, Weigbreit could not help but be impressed with what he saw.

“In rowing in an eight on a college team, 60-70 percent of the strength comes from your legs,” Wegbreit said. “But the way Kenny rows, just trunk and arms, it is probably one of the most hardcore things I’ve seen. Even the strongest athletes I know, if they are trying to pull that sort of thing without using their legs, all they would do is destroy their backs. That was something I wasn’t really expecting coming in.”

Another challenge along with getting into the same rhythm was to find the right rate to maintain. Adaptive rowing consists of 1,000-meter races but, with the National Invitational Rowing Championships being a collegiate event, all races were twice that distance. If they went as slow as the other LTA boats then they would fall behind too far, due to the extra power generated from the legs, but if they used too fast of a rate they would tire out at the end.

“One thousand meters is closer to a sprint,” Marrs admitted. “The only other 2,000-meter race I had competed in was the Head of the Charles, which is way longer so you just kind of settle in. Two thousand meters is just enough more than a sprint, but you can’t settle in too much.”

The Race Itself
After just three practices together, Marrs and Wegbreit hit the road for Worcester, Mass., and Lake Quinsagamond to compete in the Inclusion Men’s 2x at the National Invitational Rowing Championships. They were the only college duo racing in the event, going up against club teams with teammates who had been training together for much longer than a week. On top of that, equipment malfunctions on the trip forced them to have to use a borrowed boat for Sunday’s race.

“We had about 1,500 meters to get used to the new boat and equipment, then we were at the starting line,” Wegbreit said. “We really had no idea how it would go going in. All we knew was that we were the only TA boat and that we had been rowing together for a week.”

Wegbreit and Marrs were going up against a pair of LTA boats, both of which were at a decided advantage as each rower in the boat could use their legs. Meanwhile, Marrs was using just his upper body and Wegbreit, who was using his legs, had to match Marrs’ stroke rhythm and could not row to his maximum power. Additionally, one of the opponent boats consisted of a father and son pair, that featured a world record holder on the erg, who had been training together for much longer than a week.

Despite their disadvantages, the Georgetown twosome jumped out to an early lead and held a commanding advantage on one boat and a boat-length lead on the other through the first 1,500 meters.

“We came off the line, and in the first couple hundred meters really got it together and started walking through the other boats,” Wegbreit recalled. “The rowing was actually going really well. I think it was the best row we had had through the first 1,500 meters.”

Unfortunately, another equipment malfunction broke their momentum. During the course of a race, a lot of stress is put on the boats and a screw on Marrs’ right oar lock popped out. His right oar was hanging off at an angle, not matching up with his left oar and causing him to have to slow down to keep any type of rhythm. The loss of momentum allowed one of the other LTA boats to pass the Georgetown boat in the final stretch and take the victory.

“Even with the oar thing, we finished it really well,” Marrs said. “Just the fact that we were rowing in a completely difference set up and things like that, we were just super happy with the result. We obviously would have liked to get that back, but sometimes things just happen.”

As for racing together again, that is something both Wegbreit and Marrs are both interested in in the future.

“I hope so,” said Marrs. “USRowing is looking at the results of the events that have already happened to see how smooth it goes. I think it went pretty well this time. The more that they get good results from things like this, the more they will be willing to expand. I want to represent Georgetown in as many races as I possibly can. So hopefully I can do more next year.” 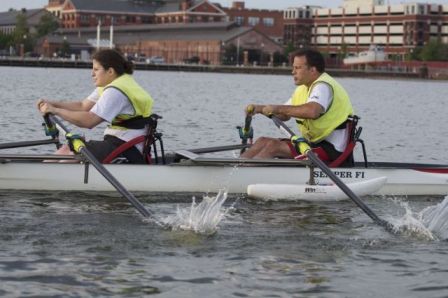