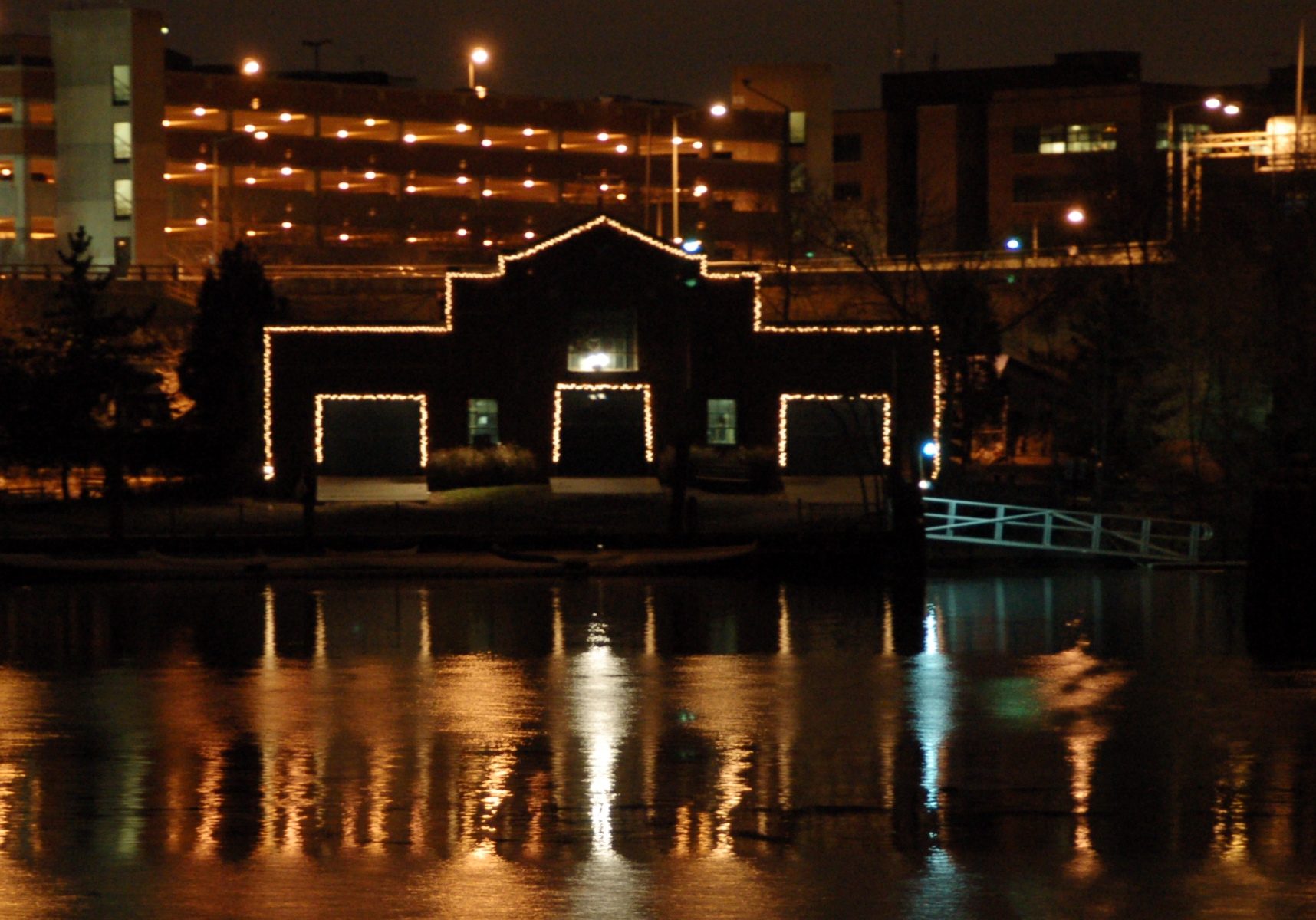 July 9, 2010 was an important day in Capital’s history – the day that the first Anacostia Community Boathouse, home to our shells, was demolished. For more tenured members of the club, the day marked an end of an era, that newer members cannot recall, as evidence of Capital’s former homes have been erased. For context, from March 1995 until March 2002, Capital found its first independent home under the 11th Street Bridge. From 2002 to July 2010, the club moved next door to 1115 O Street SE. Prior to the first Anacostia Community Boathouse’s demolition, Capital moved to its current home at 1900 M Street SE, in the second Anacostia Community Boathouse.  A few members of the club who recall those good old early days kindly shared those recollections, and many pictures, so that we all can revel in Capital’s history. 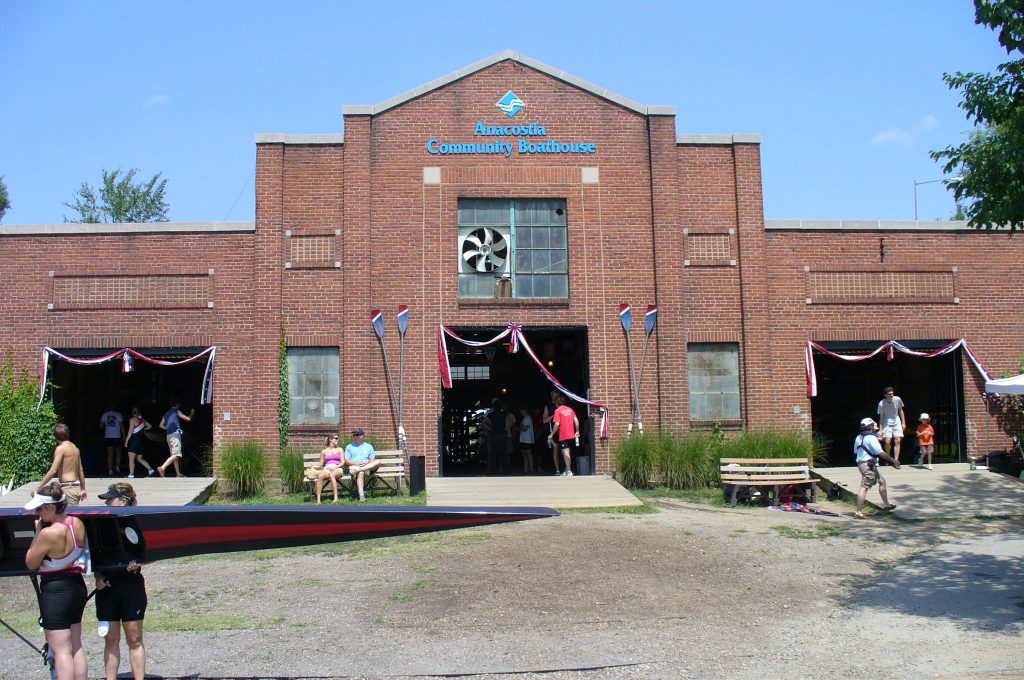 “Before we got access to the old War Department Buildings located at 1115 O Street SE and converted one into a boat storage building and the other into a erg and functional training space,” said Jen Ney, “all Capital had was two fenced-in compounds. We rowed used boats.  Many of our wood racks were built by local Boy Scouts. We had one portable toilet and a small shed for storing tools and cox boxes. We strung lights and our only overhead shelter were the spans of the 11th St Bridge. When you were putting away oars, you had to watch for pooping pigeons hovering above. (Just ask Chris Erling.)” Jeff Loftus also recalled this fine feature of the 11th Street Bridge Boathouse. He and Tom Chaleki applied several coats of marine-grade varnish on the club’s ancient wooden Pocock shells – Jack Barrett and Cliff Johnson in the “dungeon”—the vault/hollow bridge support that was home to Capital’s boats during the winter months and to pigeons year round. 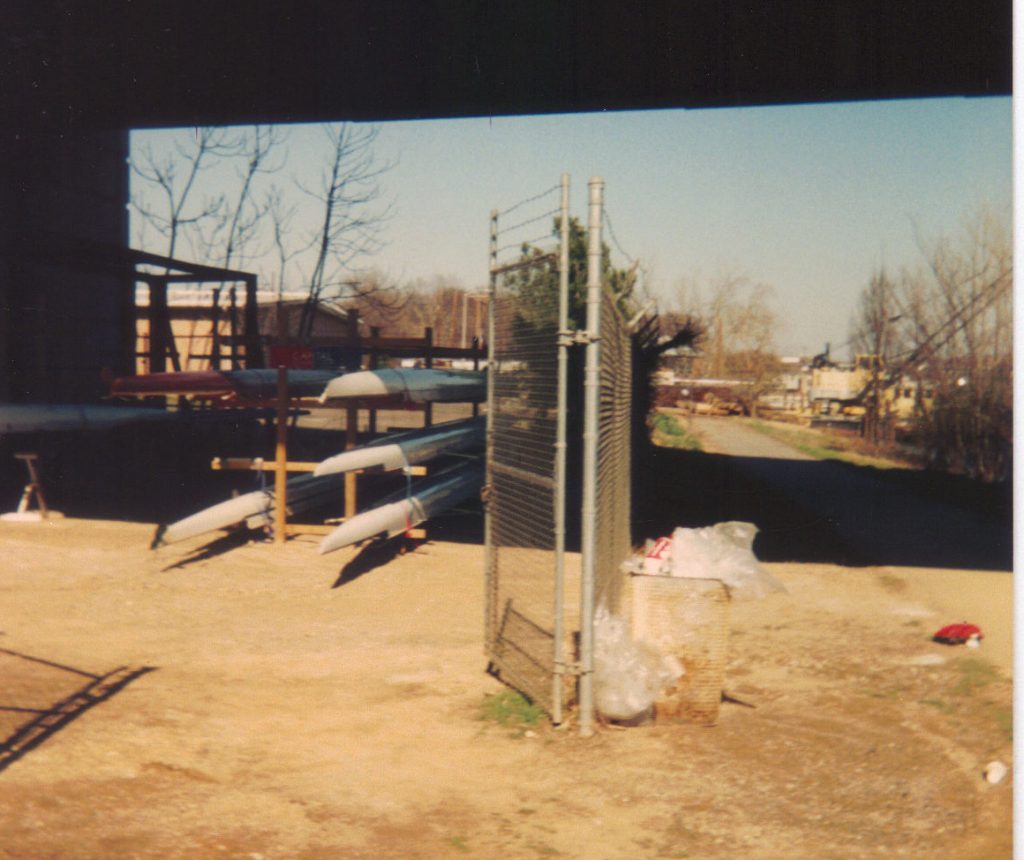 Jen also shared that under the bridge, Model B ergs were stored under a tarp. Erg tests were taken under the bridge with the noise of cars speeding overhead.  Over the winter, we stored our shells inside the bridge abutments. The D.C. Department of Transportation actually allowed us to go inside the massive abutments and store equipment inside the bridge footings. To enter, we had to remove riggers, hunch down and carry boats on your head through a small, narrow door. It was all very primitive but we had fun.

In 2002, the “old” Boathouse was “new digs,” according to Jeff. Built and operated by the Department of War to develop and test amphibious assault craft back in the 1940s, in preparation for D-Day, the building was transferred to D.C. in the mid-century. Then, the D.C. Department of Public Works operated out of the building and stored their private boats and lawnmowers there, when we were invited to the site in 1993 to hold novice classes for adults and kids by OARS (Organization of Anacostia and Sculling).   Jeff shared additional color. “After we gained access to the building, an early item of great discussion and hand-wringing was the bathroom and toilet in the back corner. Fortunately, we has some very able members who were in the Navy who installed a brand new toilet and fixed some of the plumbing. I think it was Sarah Dachos who pulled it off.”

Lots of Capital blood and sweat went into the new Boathouse. Jeff continued, “Steve Vermillion went through 3 hammers building oar racks with wood lying around the site, and bashed his thumb in the process.  He also laid several cobblestones that Bob Day had scavenged from everywhere (probably Princess Street in Old Town) on a wet area in the corner of our outside racks under the bridge. I recall that we had a devil of a time getting the three roll-up doors installed;  Carl Cole came through for us yet again. Carl was our patron saint looking over us back then.”

Sarah Dunham shared a very fond memory from 2002, when Masters Nationals was hosted on the Occoquan, so Capital rowers didn’t need to travel.  “We as a club invited Coach Guennadi Bratichko’s former rowing club from Moscow, Dynamo, to come to Masters Nationals. We had just that summer gotten access to the building, but had not yet moved all our shells into it.  So we hosted a dinner in the new-to-us building for all Capital and Dynamo rowers. It was a great (and somewhat wild) celebration of the new building, masters nationals, and the really neat experience of meeting and hosting the rowers from Dynamo.”

The strong spirit of Capital, regardless of the home of our boats and workouts, was present throughout the life of the club. Sarah also shared a memory which she says “really showcases the resilience of the club and strong leadership when we were rowing from under the bridge (before we had access to the building that became our boathouse for a while).” In 2001, the entire club – not once, but twice – had to pick up its entire operations and move to Bladensburg for a period of time.  The first time was over the summer and there was a creosote spill (caused by construction of those buildings that are now along M Street) that contaminated the area around our docks. While that was being remediated, under Jim Connolly’s leadership we moved all the operations of the club to the boathouse in Bladensburg and ran practices from up there. Later, after September 11, the part of the river where we were rowing was “closed” for a period of time and we again moved all the operations up to Bladensburg.  Can you imagine now needing to move the entire operations of Capital to a different site without missing any water time (yes, the club is bigger now, but we still had multiple programs and a lot of equipment back then)?

While countless stories are left unwritten, these few remind us that while places are special, the people of the club matter most. While we heartily enjoy the tales of past, the boathouses hosted our stories. When asked about the boathouses, Jen mentioned meeting her husband, Ralph, and Jeff mentioned a precious memory of a baby pool in the boathouse and two of his girls (now teenagers) were just toddlers at the time, splashing away.  Steve Vermillion and his toddler son jumped in as well, as did Jim Connolly with Carston. While the Club has seen that bricks, bridges, tarps, and steel can build a boathouse, Capital shows that the crucial element of the boathouse is its people.